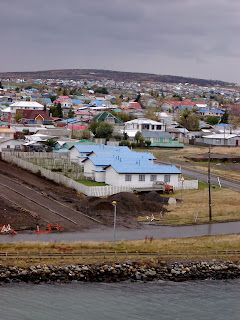 Sunday at 6 a.m. we got a wakeup announcement saying we were about to pass through the White Narrows (Angostura White) - 80 metres wide at its narrowest (we figured the boat had to be around 30 metres wide . . .). We slipped quickly into our clothes and out of our bunks and headed towards the bridge. Absolutely speechless from the beauty of it all. The captain and his second guided us through what looked like it was certain to have a Titanic ending without looking away from the water, just calling out headings to his assistant. We were meant to dock at around 9 am. But . . . after approaching the dock, there was too much wind. So we circled the harbour till about one o`clock. Trips to the bridge were cancelled, and the captain guided us towards a dock. With great pulling and shoving from tug boats, they got the ship tied up to the dock. Quite exciting, and apparently quite common. They were obviously late back to Puerto Montt for the next trip, and the next two sailings after that were cancelled. The main ship is being repaired, and they need this replacement for the "normal" run. 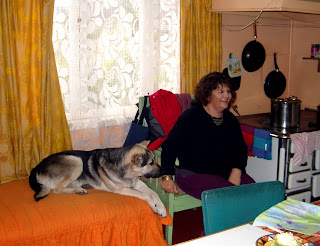 When we got to Lucie and Darrio`s house finally - much kissing by all and sundry at the arrivals terminal - Darios mum had prepared a meal for us: filled avocados and a cornmush cooked in corn husks. Delicious, but heavy - especially since we`d already eaten on the boat! (This is fun: the Chileans call meatloaf a German BBQ - that`s what we ate) The whole experience was like being in a film or TV show: Northern Exposure, eg, or something else that plays in Alaska, or in a goldrush place or something unreal. Tons of colours everywhere, a stove that has seen at least 100 years! and everywhere the sea and a howling wind. (It was so windy and the places are so makeshift, that Guy woke up one morning to a howling gale and saw the tin roof lift off over his head.)

After a stout lunch and a couple Pisco Sours, we took off that very afternoon (or rather evening - we were on Chilean time) for the park Torres del Paine (pie-nay), a distance of about 160 km. The road was there, but just. We forget what it is like to ride on unpaved roads, spoiled as we are in Europe and North America. There are MANY unpaved roads down here. We bumped along from one pothole to another, and finally, in the pitch dark, ended up in a hotel from some Klondike time warp. Very cabin-y, feeble windows you couldn't´t open because of the howling wind. Toilets that would flush, but not paper (if you see what I mean), all very casual and thrown together. But we slept, and woke to a great day.
Posted by Jeff Mann at Thursday, April 05, 2007