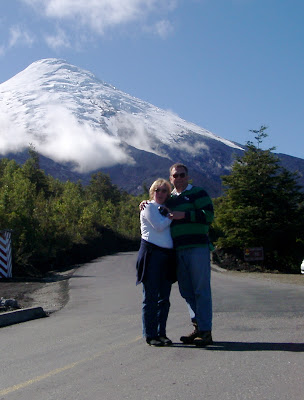 The people have been so nice and friendly - almost as though they´re so glad anyone has come to see them so far away!
On Sunday, we flew to Puerto Montt to join Guy and Annie and the boat. We hooked up with them at the airport just as we had planned. We stayed at a lovely hotel - though the city was a dump. On Sunday we walked to a great fish restaurant right on - over - the water.
We dutifully went to the boat on Monday morning, only to hear that it would be delayed till 11 that night (it was supposed to leave at 4 p.m.). So instead of hanging around horrible Puerto Montt, we rented a car and went to see the Orsono volcano - the weather was incredible, and instead of the usual rain and strong winds, we had lovely sunshine. Jeff and I took a "collectivo" to the Budget office - great fun - it´s a small bus and slows down to about 30 KM for you to jump out at your 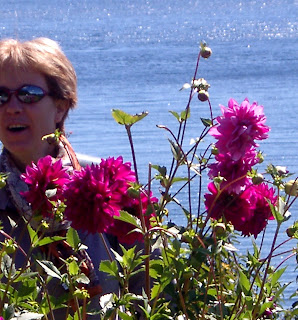 stop - wherever that is! We drove up to Puerto Varas, which is 100 times prettier than Montt. It was founded by Germans, and many buildings look straight out of Bavaria. The volcano was spectacular, and the trip around the lake amazing. We started driving up the volcano towards what was promised to be a ski area. But the road was not finished, and the ski area not started. Still, we got a lot closer to the top.
We made it back for the boat, only to hear that once we were on board, we wouldn´t be leaving till 8 a.m the following day. 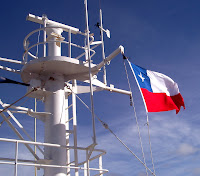 There were loads of horses being loaded on (sad to see, since they woulddn´t be leaving the truck where they were packed in for 4 days) and the most amazing heavy equipment. The boat (called Puerto Eden) is fine. Not like a cruise ship, but an adequately equipped ferry. We have our own cabin, with Guy and Annie next door. 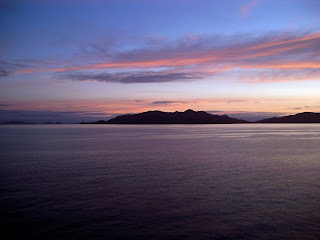 Three times a day we shuffle along in the galley area for OK to good meals, and pretty good wine. They organize films and talks on the area to pass the time. We usually don´t opt for those, but hang out on deck (well-padded against the wind, rain and cold). We watch out for whales, seals and penguins. We saw them all, but the sightings were few and far between. Still, the last time I saw a Blue Whale it was hanging in the Smithsonian Institution.

Jeff did see two films, because they were Chilean and probably the last chance to see them. One (Mi Mejor Enemigo - My Best Enemy) was about the almost war in Patagonia in 1973 (who knew?) and the other (Machuka) was about upper-lower class struggles in Pinochet`s Santiago. Both worth seeing. 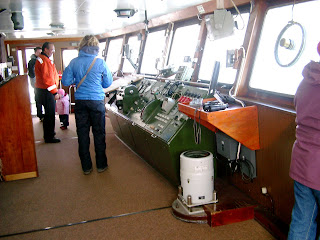 They let passengers on the bridge except during docking and at night, which is pretty cool. We can see where we are, follow progress on the maps, check out the sonar and radar, etc. It´s also drier and warmer than outside. 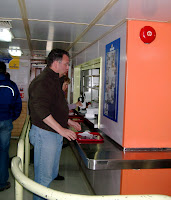 Early the next morning we enter the open ocean part of the trip. We were warned, so we dutifully get up to take our seasick pills at 4 am. We don´t have much trouble, but many people do. The dining room is pretty empty, and we don't see Guy and Annie all day. They spent 20 hours in bed! That evening we entered the fjords again. The captain slowed down to a crawl so that we would reach the Angostura Inglesa (English Narrow) at daylight. It can't be traversed in the dark. 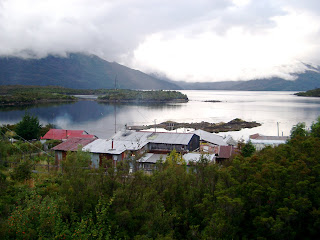 This was the day to visit Puerto Eden, a very remote village with the last pureblood Karawasek indians. There are 10-15 of them left, depending on which pamphlet you believe. One of them joined us there to travel to Santiago to work on a dictionary. He was one of 4 people who still speak the language fluently. It's hard to think of how they live out here, with one boat coming by every week, but no other contact (except for telephone, radio and Internet). 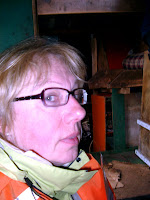 After Puerto Eden, we made a small detour to see the glaciar Pio XI. Magnificent! A blue wall spilling off the coast into the water. This is one of the few glaciars anywhere which is actually growing instead of receding. That makes it interesting as well as stirringly beautiful. 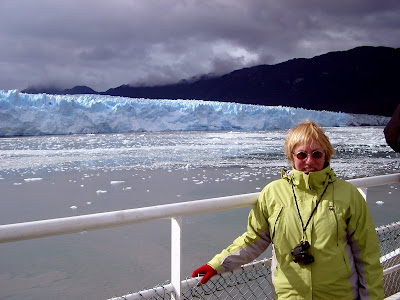