SPOILER-ridden post on my theory about the origins of Rey in Star Wars VII​: The Force Awakens.


I've now had almost two weeks to think about the biggest question left unanswered in the new Star Wars​ film.* Obviously, if you don;t want to see spoilers, STOP READING.

The film has a few clues as to who Rey is and who her parents are. Some facts: She is very, very strong with the Force, Anakin/Luke's light saber has "chosen" her. Han accepts her quickly when he is generally slow to trust or make friends. She had a vision just like Luke did on Dagobah. Luke seems to recognize her when they finally meet.


I considered several theories, and here they are in ascending order of likelihood.

- She is Luke and Leia's daughter. (probability 1%)
This would mean either Leia is not really Luke's sister somehow, or... ew. Also, Leia would then be cheating on Han. Very unlikely.

- She is Han and Leia's daughter (probability 9%)
It could be that Ley was being trained along with Ben Solo on Tatooine by Luke. When her brother Ben went to the Dark Side and became Kylo Ren, she survived and was hidden on Jakku much like Luke was hidden originally on Tatooine. As a child she probably could not tell the difference between the two planets, so she thinks she has always been on Jakku. That would explain why she is strong with the Force and why Kylo Ren is so interested in her. It also sets up a nice parallel with Luke and Leia. It would fit with the actors because Adam Driver is about 10 years older than Daisy Ridley, so he could easily play her older brother.
But it would not explain why she is SO strong with the Force, or why the light saber has chosen her. If she has the same origins as Kylo, why does she seem to be so much stronger even without any training? She does not recognize Han and Leia when they meet, nor do they act like she is their daughter.
One interesting clue that I don't really believe in, but I would like to think is true: Rey is King in Spanish. Ren sounds like Reine (queen in French). so that might, maybe conceivably point to some gender-bending clue. Remember that Vader means father in Dutch, so there is a precedent.

-She is Luke and Captain Phasma's daughter (probability 10%)

We are being led to think that Rey is Luke's daughter. The light saber. Luke's reaction to seeing her. Her abilities. But that leads to the question as to who Rey's mother is. The only possibility I can think of from the movies is Captain Phasma because she is literally the ONLY other humanoid female we know about. That is pretty sad in itself.
They could introduce another character we don't know about or elevate one of the random rebellion commanders we see in the background, but that would be weak.
It is a bit more likely that Captain Phasma is actually a Jedi, who infiltrated the First Order after Kylo Ren's meltdown and is currently undercover. That would explain why it was so easy to overpower her and convince this First Order badass commander to drop the shields. It also sets her up to play a larger role in the next movies.
But overall I think it is unlikely. We know from interviews that Captain Phasma was originally written as a man, and changed to a woman when it was pointed out that Leia and Rey were the only female human characters in the cast. I think it is unlikely that she could stay undercover while billions of people are killed by the Star Killer Base. Also, I look forward to seeing her as a bad guy.

So that leaves my actual theory:
- Rey is a genetically manipulated clone of Luke Skywalker (probability 80%) 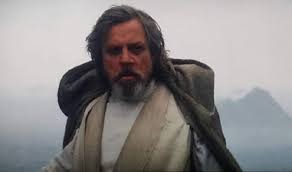 She has no father, just like Anakin Skywalker/Darth Vader. She literally IS Luke, except for that extra X chromosome. She was left on Jakku to grow up and stay hidden from the First Order. We know that cloning is commonplace in this universe, although it seems to have fallen out of fashion at least for stormtroopers. This would explain the light saber thing, why R2D2 wakes up, her Force abilities, and why Han and Leia accept her so quickly.

So that is my theory. What do you think?

* Aside from why they thought it a good idea to create a THIRD Death Star, again with a fatal design flaw that can be exploited by plucky rebel pilots. Do they never learn from history? This time even the janitor knows about the vulnerability.
Posted by Jeff Mann at Saturday, January 02, 2016