I know, there are many things I don't understand. But some things I think I should understand, but don't. Like the people in this picture: 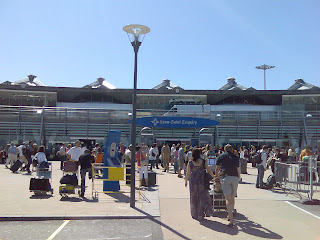 This was taken this weekend at Lyon airport during a bomb scare. Yes, a bomb. A package that could blow up. Notice how when asked to leave the building because of a suspicious package, most people chose to stay as close as possible to the building, standing in front of a big plate glass window.
Yes, several hundred people decided that standing in front of a plate glass window was the best place to be if an explosive device went off. And the police were cool with that. Notice where I am standing: on the other side of the car park.
Now, I know that these things have become routine, and it wasn't actually a bomb but somone's shopping that they left behind where they shouldn't have.
But still...
Posted by Jeff Mann at Monday, July 21, 2008