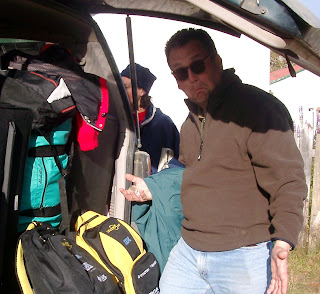 We got up at 6 to leave early for the estancia (ranch), but Jeff couldn't find his passport. We were all set for plan B - separating and spending the rest of the day in the police station, when we saw Guy coming down the stairs with his backpack. We both jumped up at the same time and almost ran him down: Jeff and Guy have the same backpack (I got two almost identical ones at two different IBM conferences), and it occurred to us together that Jeff had put it in Guy`s backpack instead of his own. Yup, that`s what happened! All`s well that ends well. 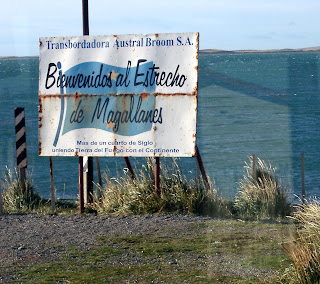 We then had a had a long ride across the Patagonian Steppe. Hard to imagine a place with that much nothing, but so beautiful. We stopped at the Straits of Magellan for a ferry. A place that for so long had been a geography class test question now was in front of us: a real river-looking thing.

We crossed the border into Argentina, and had paved roads again (Aaaahhh!). In Rio Grande it was almost impossible to find the right road (hard to believe, since there is basically one road in from the North and one road out to the South, but no signs). Finally some man whom we had asked before and bumped into again - going the wrong way - showed us the way out of town and pointed us in the right direction. Rio Grande is notable for it`s big trout sculpture, and a large memorial to the Heroes of the Malvinas (Falklands) War. 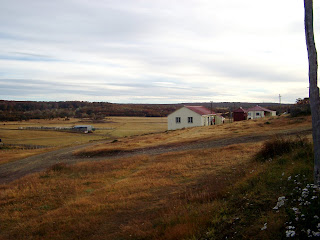 We finally arrived at our estancia in the middle of nowhere a round 6 p.m. We were greeted in French by a very chic woman and served a cup of tea in a lovely pot with china cups. I could have hugged her. Tea until then had been a bag tossed in lukewarm cup of water, almost as an afterthought. The whole thing felt like we were in a Martha Stewart spread. Lovely furniture, gracious hosts, table beautfiully laid. We ate with the owner and her son and daughter who help her run the place. Slept like a log with the window open, no noise, and sheepskins on our feet for warmth.
Posted by Jeff Mann at Thursday, April 05, 2007